Recently, I had the opportunity to experience the unique partnership between British Airways Terminal 5 at Heathrow Airport and Sofitel’s new London Heathrow Hotel.

British Airways is the exclusive tenant of Heathrow’s Terminal 5. In designing the terminal, BA wanted to create a flagship experience that would highlight the British tradition of service.

Readers might remember that Heathrow’s Terminal 5 was marred by its opening-day meltdown in March 2008. Designed to be a high-tech solution to an over-crowded, antiquated airport, Terminal 5 suffered start-up difficulties reminiscent of similar efforts at upgrading baggage handling at the Denver and Madrid airports.

Given all the bad press about Terminal 5, I’m happy to report that the situation has improved greatly since its early growing pains. The line at passport control moved quickly and my bags (all intact) arrived long before I reached the baggage carousel. When I returned a few days later for a flight to Paris, checking in and dropping off my bags was just as stress-free.

The governing principle of Terminal 5’s design is the “flow-forward” concept. With a high-ceiling, open-space design, passengers move through the terminal to the automated check-in kiosks (96 in all), to the Fast Bag Drop Desks, and a quick stop at security before moving into the concourse.

At security, the trays that passengers use for their laptops, shoes, cell phones, and belts come up automatically from below the X-ray conveyor belt. A small detail, but useful in efficiently getting passengers through the usual security bottleneck. 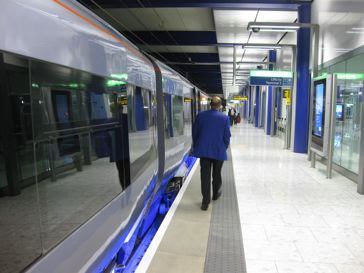 The terminal also has the advantage of a well-maintained public transportation system. There is access on M25 for bus service, private cars and cabs, and a railway station in the terminal has platforms for both Heathrow Express and London’s Piccadilly Line.

Knowing that the traffic through Heathrow will increase in the next decade, two satellite buildings will be connected to Terminal 5. One of those buildings will be integrated in 2010 as a long-haul terminal to accommodate the Airbus A380 and Boeing Dreamliner. To adapt to the airport’s next-generation needs, the floors of the terminal aren’t attached to the walls: Massive struts line the circumference of the building, allowing planners to remove the floors and reconfigure the terminal to accommodate future needs.

Though it probably speaks volumes about how much time the British Airport Authority expects its passengers to wait for flights, there is something to be said about amenities within the airport. In the public areas of the massive terminal, besides the dozens of retail stores, there are plenty of cafés and restaurants. It’s just as easy to pick up a drink from Lovejuice as it is to enjoy a leisurely meal at Gordon Ramsey’s Plane Food.

For the passenger flying on a Club World or First Class ticket or a member of Club Europe, Gold or Silver Executive Club, BA offers access to six lounges. Spread over two floors, the lounges fill an area the size of two football fields. Unlike many airport lounges that continue to nickel-and-dime its passengers, BA offers free Internet access, full buffets, open bar, and a spa with complimentary massages and showers.

Completing the trifecta at Heathrow is the recently opened Sofitel London Heathrow Hotel.  Though Sofitel properties are traditionally four and five-star affairs, I didn’t expect much from an airport hotel.  I assumed the hotel would be a very bare-bones affair, designed only to provide minimal comforts within sight of the airport’s runways.

In design the hotel seems cut from the same cloth as Terminal 5: sleek, modern, airy, filled with light coming through the glass-lined walls. The high ceilings provide a relief from the all-too-frequently overcast London-sky. The hotel is easily accessible from the airport—once you exit the terminal, before you’ve taken 15 steps, an elevator invites you upstairs to the hotel lobby.

Walking down an expansive corridor, I was struck by an amazing detail: absolute quiet. Through the large windows I could see jets taking off from the nearby runway (and I mean very nearby), but not even a whisper of their jet engines’ noise leaked inside the triple-paned windows.

That same effect continued in the high-ceilinged lobby, atriums, bar and restaurant areas and, most importantly, my room. Spacious and well-equipped, the rooms offer a respite from noise and clutter. Hotel designers conducted lengthy focus group sessions during the planning process, from which one incredibly smart detail arose: No direct sunlight should come into the rooms. The hotel has 605 guest rooms—a massive construction any which way you look at it. But rather than build a large, monolithic structure, Sofitel designed the building to have a low profile, with the rooms organized into a series of blocks, each one surrounding an atrium. No endlessly long corridors or one enormous central lobby.

And, because this is a Sofitel—and the management encourages you to never forget that they are a French-based company—you can expect great food and superlative wines in the two one-site restaurants and via room service.

From the business traveler’s point of view, the hotel has other advantages: There are 45 meeting rooms, some small enough to handle a gathering of a dozen, while the largest can accommodate up to 2,000.

When there’s the opportunity for a break from work, the hotel has a full-service spa, including massage and relaxation rooms. Best of all, you can be in the city within 25 minutes, as Paddington Station is easily accessible by Heathrow Express.

It’s worth mentioning that Sofitel claims their rooms at Heathrow 20-30 percent larger and two-third the cost of comparable hotels in the city (room rates start at £109 a night). And, in this new generation of airport hotels, business travelers are no longer limited to simply a room with a bed, but rather a hotel that is the destination.

By David Latt for PeterGreenberg.com.

Want to read more about David’s adventures? Check out his blog, MenWhoLiketoCook.blogspot.com.

Check out more of David’s articles in our Culinary Travels category.

Get more information on air travel in our Airlines & Airports section.