When you think of culinary destinations, you probably picture traveling for pasta in Italy, paella in Spain, and pretty much anything edible in France.

However, there are many other exotic, exciting and unexpected locations where chefs are rediscovering and revolutionizing the recipes of their countries—and will teach you how.

Let’s play a game of free association—what’s the first thing that comes to mind when you hear “Irish food”? Potatoes, right?

At Ballymaloe Cookery School in East Cork, you’ll learn a lot more than how to boil tubers; this place is at the center of a renaissance in Irish food thanks to founder Darina Allen and her staff.

Allen is a renowned Irish chef, author and TV personality, and is a leader in Ireland’s organic and local food movement. The school itself is a converted apple barn in the middle of rolling countryside, a half mile from the coast. The estate comprises 10 acres of formal and market gardens, and the school boasts four teaching kitchens with the latest equipment, and two demonstration kitchens.

Most of the produce used during the classes is grown organically in the gardens and greenhouses adjoining the school—which attract visitors in their own right. Eggs come from free-range hens who contentedly feed on the school’s scraps, and meat and farmhouse cheeses come from some of the best local producers. Fresh fish arrives from the boats at the nearby Ballycotton Harbour.

An intensive 12-week course is designed for serious aspiring chefs, but the shorter ones can be enjoyed by anyone who loves to cook.

A five-day course, which starts at $1,205, is aimed at teaching complete beginners to cook delicious meals and entertain with panache. You’ll learn the essential skills such as making breads, soups, patés, roasts, vegetable dishes, pastry, and jams in a process that blends demonstration and hands-on teaching.

A two-and-a-half day course on sustainable seafood is taught by Allen who shares her passion for seafood while covering the basics: how to recognize really fresh fish, scaling, filleting, skinning, and general preparation. You’ll learn a variety of recipes to demonstrate how to cook some of the best fish dishes in minutes.

Alternatively, another two-and-a-half day course teaches you all about stress-free entertaining. According to Allen, the key to minimizing exhaustion while entertaining is to prepare most foods in advance, and the recipes you’ll learn here keep that in mind.

Recipes include Mediterranean, Middle Eastern and Asian dishes, as well as cakes and other baked goodies. You’ll also learn tips on choosing cheese, serving wine and “no cooking” dishes that keep madness to a minimum. Both classes are $757 each. For a walk on the wild side, try a one-day foraging course with Allen, who will introduce you to foods that grow wild in the Irish countryside. Trend-setting chefs all over the world are employing foragers to give their cooking a new edge through local wild produce.

In the morning you’ll hunt down ingredients, and in the afternoon, she will teach you how to use them to their best advantage, such as jams from blackberries, soups from nettles and watercress, salads, rosehip syrup, moss pudding and comfrey fritters.

Not exactly the stuff you’d travel hundreds of miles to sample, but in recent years, England has experienced its own awakening in culinary tradition. With Michelin-starred restaurants and celebrity chefs like Gordon Ramsay making gastronomic waves, travelers are now learning that England can be a culinary destination in its own right.

At Swinton Park in North Yorkshire, your “cookery” school is in a wing of a real castle (also a hotel) set in 200 acres in North Yorkshire with acres of walled vegetable gardens. The courses cover a wide range of styles and techniques, from modern British, dinner party preparation to butchery and meat courses. Susan Cunliffe-Lister, who masterminded the restoration and design of the walled garden and greenery, teaches you the fundamentals of planting your own garden while you enjoy the hands-on experience of collecting fruit, herbs and vegetables.

Simon Crannage, the head chef at Swinton Park, combines demonstrations with hands-on cooking in his master classes on sauces, vegetable side dishes, boning and dish preparation with pate and terrine, along with wine pairings.

If you actually want to know where your meat comes from, check out the butchery courses offered by Tim Wilson, a local farmer and proprietor of Ginger Pig butchers in London. He gives insights into animal husbandry, the history of the different breeds, and the seasonality of meat, as well as the different cuts and the ways in which each cut needs to be hung, prepared and cooked. Other specialty courses include “Family Food” which helps parents create tempting and nutritious food that even the pickiest toddler will love, and a half-day “Farm to Feast” course that features a hands-on cooking classes followed by a three-course lunch. 01765 680900, www.swintonpark.com

If you’re more into eating than cooking, spend a day with renowned food writer and TV personality Celia Brooks Brown, who offers something called “gastrotours” through London. These small-group city tours introduce you to some of London’s best cuisine, but it’s not just about the hoity-toity stuff: a four-hour walk through Notting Hill includes tastings at deli, a bookshop café, a winery, and a chocolate shop.

A walking tour of Marylebone Village includes tastings of everything from oysters to exotic chocolates, and a visit to the famed Borough Market features morning brunch followed by samples at the market and afternoon tapas. Tours range from about $100 to $160 per person. 44 208 376 2847, www.celiabrooksbrown.com/gastrotours.php

And if you’re into a more DIY experience, check out The May Fair hotel’s foodie package that showcases British cuisine. The”Love Your Weekend. Love Food” package includes a welcome basket of British treats, dinner for two, and a voucher to Notting Hill’s Books for Cooks café. But best of all, the package includes a unique “Just British” Taste Trail map, which takes you through London’s food markets and shops, including Marylebone Farmer’s Market, the famous wine shop Berry Bros, and the food hall of Fortnum & Mason. The package is available for guests each weekend, with a two-night minimum stay, starting at about $620 per night. www.radissonedwardian.com/londonuk_mayfair

Have you ever heard of Peruvian-Japanese fusion cuisine? Well, you will when you study under two sisters from Lima, Penelope and Brisa Deneumostier, who host a seven-day Taste of Peru excursion to their home country.

Not only do these ladies share their passions for cooking, they’ll also introduce you to their chef friends, local artisans, and even their parents—whose pottery studio you’ll be visiting. Much of the trip is about gaining insights into modern Peruvian food through some of the top chefs in the country who will often be cooking you lunch and dinner (when you’re not cooking your own!).

Your journey begins in Lima, where you’ll be taken to some of the city’s best restaurants and markets, as well as participate in hands-on cooking lessons. But this trip isn’t just about food—it’s also about experiencing Peruvian culture and history. Some of the highlights of the tour include visiting the Rafael Larco Herrera Archaeological Museum built over a 17th century pre-Columbian pyramid, followed by seafood lunch prepared by chef Gaston Acurio (a good friend of the sisters, as well as a renowned chef).

You’ll also participate in a cooking class of Nikkei Japanese-Peruvian cuisine, watch a ceviche demonstration and sample the local firewater at a pisco tasting. And, of course, a trip to Peru must to include a visit to the breathtaking Machu Picchu, so the tour includes a flight to Cuzco to see the Urubamba Valley and the ruins at Machu Picchu.

The tour starts at $3,300 per person and includes accommodations in five-star lodgings. Penelope and Brisa also give private tours, which they recommend you book six months in advance. 510-655-0566, www.atasteofperu.com 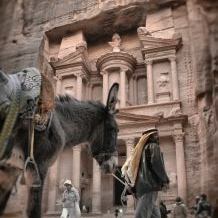 Sure, visitors are flocking to Jordan to see the famed Deserted City of Petra, recently named one of the new Seven Wonders of the World. But if you’re a traveler obsessed with Middle Eastern food, Jordan is fast becoming a place to experience the best of the best.

A British company called On the Menu creates culinary experiences around the world, including a week-long tour of Jordan. Jordanian cuisine is a mesh of Arabian culinary traditions and Lebanese influences, and is one of the most elaborate cuisines in the world. During your tour, you’ll learn to create some traditional dishes such as hummus, falafel and baba ghanouj, and some less familiar plates such as shorabat freeka (green wheat soup), mutabel (eggplant dip), and siwani djai (pan-roasted chicken).

A separate lesson will teach you how to make the traditional Bedouin dish zarb, which consists of lamb and vegetables grilled outdoors in a sealed clay oven.

If those dishes sound healthy—it’s because they are! This program is immersive, meaning that you’ll be cooking your authentic meals alongside chefs and local women, and travel with a chef to pick your produce in the markets, orchards and farms.

Of course, no trip to Jordan is complete without visiting Petra, so this tour includes two days visiting the Deserted City, as well as optional excursions to go scuba diving in the Red Sea, visiting a spa at the Dead Sea, or seeing the famed Mount Nebo. Accommodations are at a four star hotel, a few kilometers outside of Petra, where the rooms were once the little houses of an 18th century Bedouin village! Rates start at about $1,613 per person, and $1,371 for a non-cooking companion. 08708 998844, www.holidayonthemenu.com The Treetops Luxury Lodge and Estate on New Zealand’s North Island a rather unique culinary experiences—foraging along a food trail with a Maori chef. Charles Royal is your guide, and he has designed this tour to educate guests about native cuisine and indigenous herbs and plants used by New Zealand’s indigenous people.

During the tour, you’ll sample foods made with native herbs from the property and learn about their medicinal and nutritional properties. You may stumble across items like the leaves of the Kawakawa tree, which can be used to season gamey meats (or ease stomach pains and tooth aches!) or the Piko Piko, which is the national symbol of New Zealand, that can harvested and eaten. The tour ends with a Maori-style lunch for two. About $140 per couple per hour, with a two-and-a-half-hour minimum. www.treetops.co.nz, 64 7 333 2066

And, while you’re in New Zealand, try out another type of “native” food: the pavlova. A pavlova is a light, fluffy meringue cake covered with cream and strawberries or kiwis and is often served at family gatherings.

In the artsy South Island town of Nelson, Linda McDougall offers a half-day workshop out of her home (also is a bed and breakfast). You’ll start the afternoon by gathering free-range eggs and picking fresh strawberries, and then return to the house, which overlooks the Matai Valley and Nelson. You’ll learn about the history of pavlova—and why it’s controversially claimed by both New Zealand and Australia. Courses are Saturdays and Sundays from 3 p.m. to 6 p.m. and cost about $60 per person. 64 03 548 2311, www.creativetourism.co.nz

By Lauren Van Mullem for PeterGreenberg.com

Global Gourmet: Food Gifts from Around the World

Or check out the entire Culinary Travel section.