Road warriors and flight crew alike agree that sometimes it seems as if airline passengers check their manners and common sense at the ticket counter, along with their luggage. Correspondent Karen Elowitt shares the basic airplane etiquette lessons learned from the road.

From over-stuffed carry-ons, to odorifous seat-mates, to over-hyped kids kicking the backs of seats, the fact remains that we have to put up with an astonishing amount of bad behavior while in the sky.

And it’s not just passengers who are affected. Travel insiders worldwide both cheered and jeered the JetBlue flight attendant who had a meltdown after a baggage-related argument with a passenger and ended up dramatically (and illegally) storming off the plane via the emergency slide.

Granted, the experience of flying in coach is not pleasant. 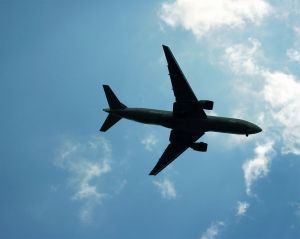 Cramped seats, crying babies, spilled drinks, and bad hygiene can test the patience of even the most mild-mannered flier. And all too often, other people’s bad behavior can cause us to forget our own manners, and lead to an every-man-for-himself mentality.

“In an environment surrounded by masses of people, the norm seems to be to pretend no one else exists,” laments Gary Leff, senior moderator at Flyertalk.com, who writes the blog The View From the Wing.

Despite the fact that rude seems to be new normal, I have faith that it’s not too late to revive good manners in the sky. So here’s a quick primer to help remind you of proper airline etiquette. If you are a habitual offender, this may clear a few things up. If you are the offendee, this may help get you through your next flight. In either case, the key to surviving the seemingly endless stream of airborne assaults is to practice the Golden Rule.

If you’re not sure what The Golden Rule is, it starts with “Do unto others …” Your mother probably taught you this at an early age, but you may have forgotten it. However, it’s worth re-learning. For example, if you have to get out of your seat for any reason, do NOT grab the headrest of the seat in front of you for leverage. This will not only prevent the guy sleeping in said seat from getting a bad case of whiplash, but may pay off in good karma later, when he warns you in advance that he is about to recline his seat.

If you’re 6’5”, like my father, this heads-up is REALLY appreciated, since it allows you to rearrange your legs and avoid injury. According to SeatGuru.com, the average seat pitch on a short-haul flight is only 31 inches, so there’s not a lot of wiggle room, literally. (If all else fails, there’s always the Knee Defender, a pocket-sized device to help defend tall travelers from reclining seat backs.)

If armrests are the issue, sharing is the name of the game. Don’t take more than half. If you find the armrest already fully occupied when you are seated, a little gentle elbow-nudging is not out of order. Otherwise, you’ll just have to wait until your seatmate goes to the lavatory, then grab as much armrest as you can.

Finding yourself sitting next to a Chatty Cathy can be a little more complicated. If you don’t feel inclined to speak, the best defense is a pair of headphones plus a polite, “Sorry, but I’ve been dying to listen to this podcast all day.” If the shoe is on the other foot and you feel the need to converse, please note that when your seatmate starts putting their fingers in their ears and yelling “la la la la la la” it’s a good sign that you need to put a lid on it.

Many years ago, on a flight from South America to Miami, I had the pleasure of sitting next to a wildlife biologist who was on his way home from a research trip in Brazil. His vivid descriptions of the exotic flora and fauna of the Amazonian rainforest kept me completely mesmerized, until he revealed that he had brought a souvenir back with him. A live one. One with four legs and a tail. And it was right there, under the seat, in his carry-on bag. Did I want to see it? No thank you, I graciously declined.

Though most travelers don’t have to deal with seat-mates carrying such unusual (and possibly dangerous) cargo, many of us have been stuck next to that annoying person who keeps getting up repeatedly to pull things out of the overhead bin. And sometimes drops them on our heads.

Solution: BEFORE you get on the plane, organize your “below bag” and your “above bag.” The below bag contains items that are needed on a regular basis throughout the flight, such as water, medications, CDs, and magazines. (But please, no live rodents.) The above bag contains everything else that’s NOT needed.

Make sure the items in your above bag are securely closed and fastened. One business flier I know spent an entire two-hour flight with water dripping on his head—presumably from a water bottle somewhere above him that wasn’t closed tightly enough.

A word about over-stuffed bags: just DON’T DO IT. It takes an average of 30 to 45 minutes to board a 747. Imagine how much faster everyone could get seated if bin-hogs packed one-third as much stuff. Sure, cramming the entire contents of your closet into a dinky carry-on will give you bragging rights about your superior packing techniques, and exempt you from paying that $35 checked-luggage fee. But it is also completely self-centered to assume that the 300 people waiting behind you to board are thrilled to watch you try to wrestle a steamer trunk into the overhead bin for 20 minutes.

For some reason, many of us forget when we’re in the air that certain activities must be done in the bathroom, just as they are on the ground. “I can tell you about passengers changing dirty diapers on the floor of the first-class cabin (just after meal time!), bare feet on my arm rest, clipping toe nails, and elevated bare feet up against the bulkhead wall,” says Leff.

Taking off your shoes may make your flight more comfortable, but your foot odor may make someone else’s flight miserable. So the rule is to leave them ON, or bring a fresh pair of socks for the express purpose of lounging. Remember, you’re in a plane, not your living room.

As for clipping toenails, changing diapers, combing hair, flossing teeth and just about any other activity you wouldn’t want to see (or smell) a stranger perform, take it to the lavatory. That’s what it’s there for—privacy.

Speaking of lavatories, have a care for the next person and wipe the counter and pick up stray garbage off the floor after you use it. Unlike a hotel, there is no maid to clean it up after you do your business. And please don’t be tempted to join the Mile-High Club. There are already enough weird and nefarious activities going on onboard without you adding to it.

Frequent traveler Debra Pappler, 41, used to fly back and forth between the U.S. and Japan several times a year with her daughter. On one flight, a nearby passenger complained that Debra’s child was watching a DVD without headphones (albeit with the volume turned down very low) and insisted she put some on. After 30 minutes of trying to wrangle her toddler into a headset, which resulted in a huge temper tantrum, she gave up. “Seriously, would you rather softly hear the theme from Dora the Explorer, or listen to my kid SCREAM for half an hour?” she asked.

Sometimes it’s just not possible to quiet an unhappy child, in which case it might be a good idea to invest pair of noise-cancelling headphones or at least a basic set of earplugs. However, parents need to be as vigilant as possible about policing their offspring. Bring books, toys, snacks, videos—WHATEVER it takes to keep your kids happy and in their seats—and keep an eye on their feet. Many a flier has had their flight ruined by little feet kicking against their seat or digging into their backs.

So tell your kids they’ll get a “time out” if they don’t keep their feet still, and use the moment to teach The Golden Rule to the next generation. And if you’re the frustrated recipient of repeated kicking, try bribery. Seriously.

A Word About Attitude

What if the parent sitting behind you won’t keep little Johnny still, or worse, is ignoring him, slamming whiskey sours, and won’t get off her cell phone? The key is to resist the impulse to lash out. The old adage, “you catch more flies with honey” rings true in flight more than anywhere. So a gentle, “Excuse me, I’m having trouble hearing the movie over your phone conversation” will probably be met with more compliance than, “Jeez, you jerk, get off the damn phone!” If that doesn’t work, escalate your complaint to a flight attendant. If one flight attendant’s admonition doesn’t change the behavior, see if you can get a couple of them to gang up on the offender.

The instinct for self-preservation partially explains why so many of us want to respond in anger when we’re frustrated. But this is actually counter-productive, since rudeness generally begets more rudeness. Furthermore, not everyone in the plane is necessarily aware that their behavior is bad.

“The post-deregulation era has made flying incredibly democratic, mixing cultures and classes and all cross-sections of the country,” says Leff. “Flying is no longer limited to homogeneous traveler types, so you get people with different expectations, preferences, behaviors, and experience levels.”

And if you mentally prepare yourself before the flight for possible disruption or discomfort, you’ll likely be better able to roll with it when it happens. After all, when you’re jammed in a tiny metal tube with hundreds of other people for several hours, something unpleasant is bound to happen. You can’t control that, but you can control how you respond.

Izabel Raupp, a former flight attendant for Abu Dhabi’s Etihad Airways, tells of one passenger who adopted the wrong attitude toward her during a weather-related delay.

“Once we were on a night flight from Frankfurt to Abu Dhabi, but had to divert to another city due to fog,” she explained. “While we were waiting to resume the flight this man in business class came to me and started ranting about how it was ‘unacceptable’ that Etihad was keeping us there! I told him that I also thought it was unacceptable, then pointed to the sky and told him the only way he was going to resolve the problem was to take it up with God—since Etihad could do nothing to lift the fog!”

By Karen Elowitt for PeterGreenberg.com, whose suggestions are derived from years of suffering next to guys with halitosis and other horrors.