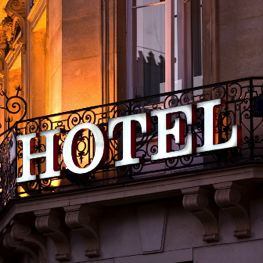 While booking plane tickets and hotel rooms can be pretty straightforward, it’s important to know exactly who you’re dealing with. At first glance, some websites may seem like the real deal, but they’re not. Peter Greenberg explains how to recognize when a site is running a scam—and gives his advice on how you can avoid them.

Every day, American consumers book 480 hotel rooms per minute online. A majority of those online bookings are done through reputable OTAs—Online Travel Agencies—such as Expedia, Orbitz, Travelocity, and Kayak.

But a growing number of bookings are made on confusing third party websites that sound legitimate, but aren’t. There are about 2.5 million questionable bookings, representing more than $220 million in revenue. It all comes down to websites that often pop up as paid advertising in search results and appear—some say in a deceptive way—similar to a hotel’s actual booking website. Many even prominently display hotel logos while minimizing the appearance of their own logos.

Essentially, these are third party websites trying to pass themselves off as actual hotels. So a growing number of consumers think they are booking a room directly at a Hilton hotel—offering great reduced rates—and it turns out they’re totally out of luck.

The images on the website may look like a brand such as a Hilton created them—as well as the quoted rate. But if you study the top of the ad, the number listed is not for the hotel, but rather for the third party website. So you may think you’re calling the hotel, but in reality, you’re not.

Then you arrive at the hotel to discover your reservation never actually existed, or the room you asked for doesn’t exist…even though you’ve already paid for the room.

Or, you may have a valid room reservation, but then discover that the hotel never got your request for two double beds, or a no smoking room or a handicapped accessible room. Worse, the rate you were quoted doesn’t exist, but your credit card was charged. Or you find out you then can’t cancel the reservation, and these sites rarely have customer service centers.

Some go by the name of “reservation-desk.com/hilton,” or “Hilton.reservationcounter.com.” At first glance it seems like these websites belong to Hilton, but they don’t.

Translation: the AHLA (American Hotel and Lodging Association) claims that these third party websites are attempting to pass themselves off as the actual hotel. Earlier this week, five members of Congress sent a letter to the U.S. Department of Justice asking them to investigate the ongoing problem. Understand what a third party website is. Expedia, Priceline, and Hotels.com are not third party sites, they are aggregators that get their inventory directly from the hotels themselves.

Watch what happens when you search online. More often than not, these questionable websites show up in search results as paid ads. Do not click on them.

This can also apply to 1-800 toll-free numbers for “reservation centers” that want you to think you are calling Marriott, for example. But they are simply a third party site that will offer to make you a reservation for a Marriott.

The economic reality here is that the mainline hotels want you to book their websites only—let’s not forget there’s a profit motive here. What I am telling you to do is this: before you book on any third party website, have a conversation directly with the hotel itself. Ask them to verify that the website is valid, and perhaps just as important, that the rate they are offering is also valid.

Since room inventory changes by the minute at most hotels—remember, an unsold room is revenue the hotel will never recoup once the sun rises—you might just find that a phone conversation results in a much better rate, and you can skip the websites all together.

One other caveat: when booking a hotel room, it’s not just about the rate. It’s also about the conversation. Once you establish a rate you want to pay, the conversation isn’t over, it’s just getting started. Will the hotel throw in free Wi-Fi? Can your kids stay for free? Eat for free? Will the hotel waive the resort fee, or throw in free parking?

In an Internet world, my experience tells me that while it’s okay to research your travel online, it’s still essential to have the conversation—and with the hotel directly, not a third party reservation center.

Like the hotel booking problem, these scams—which most recently surfaced in late 2013—are counting on logo and brand confusion.

Here’s how it works. You receive an official-looking letter—on official-looking letterhead from what appears to be a well known airline—claiming that you “have qualified for an award of two round-trip airline tickets. Congratulations. These tickets are valid for travel anywhere in the continental U.S. from any major international airport. The retail value of the award is $1400…”

To further motivate you, the letter says that the company has attempted to contact you many times without success and that they will have to offer the tickets to someone else. Then you are instructed to call a toll-free number to “claim” your award. If you do, there’s a small processing fee you’ll need to pay with your credit card.

Now, look more closely at the letter. The typeface of the letterhead looks real, but it was sent by “American Airways”, or “US Airlines.” One small problem. Those airline names DO NOT EXIST. It’s American AIRLINES and US AIRWAYS, which means it’s a total scam. Yet, a lot of people fall for it. Why? It’s the continuing power and allure of travel, something most of us love to do.

But there are several rules you need to follow on these hotel and ticket scams….and it usually involves making just one very important phone call.

It’s always good to research hotel rates and airline fares online. But before you hit “send” along with your credit card information, call the hotel directly—not the number listed on the website or letter, which may only go to that third party website.

Confirm both the validity of the website as well as the deal itself. The same thing applies to the airline ticket “offer.”

Any time you’re asked to use your credit card to “process” something that you’ve ostensibly won, that’s a clear warning that you’re about to be scammed. Call the airline and get them to confirm the actual “promotion” or sweepstakes. Nine times out of ten, there IS no promotion or sweepstakes.

You can see Peter Greenberg’s full report for CBS below:

For more information about travel scams, check out: