Almost everyone who visits Washington, DC wants to view the iconic elements such as the Lincoln Memorial and the White House.

Some travelers rely on photographs to capture these icons, while others are content to experience and visualize the major entities.

Regardless, everyone is faced with the challenge: where should I go, and when, to get the great views and savor the best moments?

Here are 10 tips based on my recent year spent photographing Washington, DC for a travel book. 1. If you get up early one morning, go to the east side of the Capitol and watch the sun hit the glorious dome. Position yourself at 1st and East Capitol Street. Sometimes there are clouds in the background that make the setting even more majestic as the pink light of dawn illuminates them and the dome.

2. The quietest time to visit the Lincoln Memorial is about 8 a.m. The sun will have lit up the memorial.

This is a tranquil and meditative time when you can have a peaceful visit with this great man and read his moving words. By later in the morning, and throughout the day, throngs will jam the place.

3. The White House faces south and has large lawns, making it quite open, so it can be viewed and photographed any time from about 10 a.m. to 4 p.m.

Be aware that tripods for photos will not be allowed here and in many other places around the icons, due partly to the liability risk of hordes of people tripping over tripods. 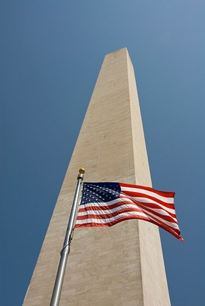 4. The Washington Monument is a beguiling presence. It will often be in your view in the distance.

Distances are deceptive in Washington. Things are farther away than they appear to be, especially if you are walking.

Be sure to stroll in close to the Washington Monument. Walk around its base and look up at this obelisk through the circle of flags.

5. Washington is ever changing. There are new views never before possible.

For example, the Newseum, a museum examining the media’s effect on our lives, opened in 2008.

Go to the sixth floor terrace of the Newseum and gaze out at the Capitol, several museums, and a large group of historic Federal buildings overlooking the mall. This view was never seen until 2008. For more on the Newseum, check out Newseum Commemorates Historic Election in Washington, DC as well as Washington, DC Travel for Obama’s Inauguration And Beyond.

6. There may be something interesting seasonally to see during your visit. The two blockbuster times are the first days of April for the Cherry Blossom Festival and July 4 for the fireworks over the icons. But there is more.

Fall color is ablaze in the last week in October. Lovely maple trees at 17th and C Streets can be used to frame the Washington Monument.

Check the city tourism Web site www.washington.org for what’s going on during your visit. 7. Even if you’ve been to Washington many times, there are always fresh things to see. Have you savored the sensuous curves in the architecture of the American Indian Museum on the Mall?

This innovative architectural form breaks away from the large salon-type buildings so typical of earlier Washington. The newest major monument is the Pentagon Memorial to the 9/11 tragedy.

8. Night is an exciting time to see and photograph the icons.

There are two special views: Go to the Reflecting Pool at the foot of the Lincoln Memorial to see the Washington Memorial shimmering in the water; then, at the other end of the Mall, go to the pool in front of the west side of the Capitol and see its dome mirrored in the water. The National Park Service manages these areas and will allow a tripod if you are not in a high-traffic area.

9. One of the most popular museums in the world, Air and Space, actually has two locations that you may find equally appealing. One is on the Mall and the other is out near Dulles Airport.

At the Mall location you can see the Wright Brothers’ Flyer, the first airplane, and Charles Lindbergh’s Spirit of St. Louis. The Wright plane is in a dark room, so you will want a high-iso digital camera to make an image.

The new Air and Space site near Dulles, called the Udvar-Hazy Center, has such treasures as the Blackbird, the fastest “air breathing” aircraft ever built, as well as the infamous Enola Gay, which dropped the atom bomb on Hiroshima, Japan.

10. Getting to all the sites around the Mall requires a transportation strategy. Don’t try to use your car. You’ll get caught in gridlock and parking challenges.

Instead, look a map over carefully and learn the locations of the Metro stations. The Metro is often your best choice.

There are also surface tourism buses on fixed routes, such as the Tourmobile. Walking will be required, and the distances are longer than they may seem to be visually.

If you are in a big hurry to see several sites in a few hours, consider hiring a cab to drop you and hover, returning to pick you up when you signal ready via cell phone.

Text and photos by Lee Foster for PeterGreenberg.com. Lee Foster’s and Ann Purcell’s new travel guidebook is The Photographer’s Guide to Washington, DC: Where to Find Perfect Shots and How to Take Them (Countryman Press/Norton). Listen to Lee on Peter’s radio show this weekend, broadcasting live from Washington, DC.