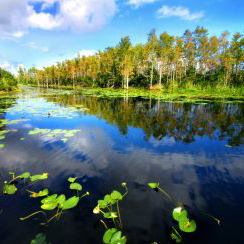 Instead of heading to Puerto Vallarta or Cancun for her college spring break, Courtney Crowder jetted off to New Orleans on a quest: to lend a hand to multiple volunteer organizations in one week.  Read on for the first of her three-part series. Can this hardened New Yorker survive a week doing manual labor in the great outdoors and really help make a difference on her journey?

When you come to work at a volunteer-based organization, you might expect to be surrounded by tree-hugging hippies. Normally I hate them.

Wading through mud carrying baby Cyprus trees while watching my every step for piles of fire ants, I didn’t have high hopes for my long-haired volunteer leader to change that opinion.

Morgan, a project coordinator for Common Ground Relief in New Orleans and my leader on this particularly muddy trek, specializes in working to rebuild the wetlands of the Mississippi delta, which is disappearing by football fields everyday.

Being a hardened New Yorker, greenery doesn’t impress me. “Couldn’t we be doing something better with our time like building a house or tutoring kids at a local school?” I asked.

Morgan coolly responded with, “In New Orleans, the wetlands can mean the difference between a regular hurricane and Katrina.” He went on to explain how the wetlands act as a buffer that slows or sometimes even stops storm surges in their tracks. Having a healthy wetland area may not have stopped the devastation that occurred after Katrina, but it definitely could have lessened the blow.

Also, the roots of wetland trees make a safe nursery for the seafood that supports a large population of the city’s residents and makes up the food of the NOLA culture.

The wetlands of New Orleans are no longer thriving for many reasons, the infamous levee system put in by the Army Corps of Engineers being one of them. The levee system stops (when it works correctly) any kind of natural flooding of the river’s banks. This keeps the plant life from receiving the nutrients found in the river’s sediment and water that should flood its banks on a regular basis.

The area’s plants are also being depleted because of the invasive salt water that has come into the system from the extensive canals that were built to allow easier access to industrial ocean liners and therefore build up this Southern city’s economic status.

After facing my fears of getting dirty by putting my arm in a giant pile of pure, black dirt up to my elbow, my group was able to plant around 30 trees on the east side of New Orleans’s Lake Pontchartrain.

Looking at a muddy field of small Cyprus saplings that would grow to rival the previously planted ones that are now at least 15 feet tall, it occurred to me, maybe sometimes being a earth-hugging, tree-loving, hippie isn’t always bad – and maybe sometimes it can even save a city.