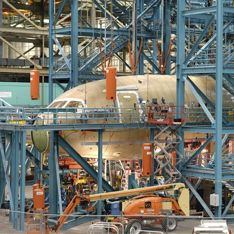 Production of the Boeing 787 “Dreamliner” may soon get back on track now that an eight-week strike involving 27,000 of the company’s employees is nearing its end.

The Chicago-based Boeing was forced to shutter dozens of factories in three states after workers from the International Association of Machinists and Aerospace workers went on strike on September 6 over concerns about job security and compensation.

After an initial offer was rejected on September 3, the union went on strike.

After weeks of negotiations, the union finally agreed on Tuesday to vote within five days on a four-year deal that includes a 15 percent raise over four years, a freeze on health-care costs to the 2005 level and bonuses totaling at least $8,000 for three years. The proposed contract also limits the use of outside contractors, which was a key point of contention between the two sides.

Union leaders said Tuesday that they would not bring a contract to the table unless they believed it would be accepted by the majority of members.

The strike cost the company about $10 million per day in lost revenue, and delayed completion of the Dreamliner, which was already about 15 months behind schedule. The first planes will not be delivered now until late 2009. Company officials also said that third-quarter net income dropped 38 percent because of the strike and other production issues.

The 787 Dreamliner is a super-efficient midsize airplane that offers 20 percent better fuel economy than similar-sized planes, and more cabin comfort and convenience. Since 2003, 58 customers from six continents have ordered 896 of the planes to the tune of $151 billion, making the launch of the 787 the most successful in Boeing’s history.

Read more about air travel in our Airlines & Airports section.

Check out more travel news you can use in our main Travel News section.