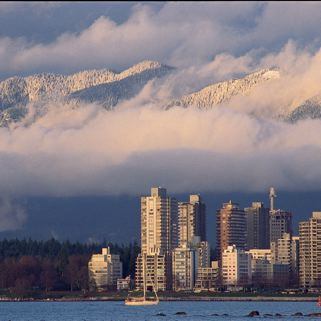 Theresa Corigliano is a studio executive off on an adventure of a lifetime: attending the 2010 Winter Olympics in Vancouver.

She’ll blog regularly from Vancouver on how the experience lives up to the anticipation, and share her lessons learned on preparing for the Olympics.

My mother was born in Vermont, child of ice and snow and frozen ponds, which meant two things: sliding down hills on hand-me-down American Flyers or pieces of cardboard; and skating in vintage white boots with silver blades.

She made it fun, and made it look effortless. When my sister and I were cold, snow suits soaked through, mittens soggy, she always wanted to stay. She was the bigger kid in winter. It’s because of her I learned to love all things snowy and cold, and realized because she was good, she made winter sports look easy. It’s with her I watched the Olympic Games, and plastered pictures of glorious Olympians like Jean Claude Killy and Peggy Fleming in my locker instead of rock stars.

All these years later, I cannot believe I am sitting in row 16C of the packed Alaska flight to Vancouver.

Everything has gone smoothly. Isn’t it always the way when you come to the airport two and a half hours early? You’re through security and at the gate in 10 minutes. Alaska’s got it down: kiosks available left and right for check-in; enough ticket agents to manage the crowds; and those ticket agents are all nice, even at 6:30 a.m.

What’s happening here? That’s what happens when traveling to your first Olympics—it makes you happy to be at the airport.

I’m meeting my lifelong friend and Olympic travel companion, Marie, who was re-routed by United as a precaution against the terrible East Coast blizzards. There is no easy way to get from Sanford, North Carolina, to anywhere—especially Vancouver—but she persisted. And with the assistance of a very nice United airlines customer service agent, she re-booked with no cancellation/change fees via Chicago and Seattle. She had to depart one day earlier than planned, but she made it out.

Customs: a breeze. Baggage claim: a breeze, and free (free!) baggage carts. (Obviously Canadian officials had a meeting a few weeks ago: “Look, if we don’t get rid of that ridiculous no-carry on restriction, Greenberg is boycotting us. It’s a no-brainer. Lift the restriction. And give him a damn cart.”)

Have a question once you’re here? Try not to bump into a VANOC ambassador. (Stands for Vancouver Olympic Committee, but pronounced VAN-KNOCK). They may not have an answer to your question, but by gosh, they’ll knock themselves out trying to find it!

I get even better news—I don’t have to schlep to another terminal to meet Marie’s Air Canada flight as there is the one central arrival area. So off to grab lunch, and then will rendezvous with her in the official meet-and-greet area, right outside baggage claim.

I look to my left on may way out: it’s the Russian hockey team. I missed seeing most of the players, but even the dollies of stacked-up equipment bags give me a jolt.

For me, the Olympics have always been on television. And now, the red of the Russian team traveling uniforms is so bright that it puts Technicolor to shame. The colors, the sounds.

“Welcome to Canada” says a turquoise-jacketed VANOC-er (called “blue people” by the locals) as I work my way down the arrivals carpet. I know he really means it.

Tip: Vancouver has a train system that will take you from airport to downtown in about 30 minutes. Once the Games start, event tickets get you free rides, but getting around the city, the zone-to-zone train system to bus system is a one-fare proposition with a certain time frame. There is help everywhere to explain how it works.

Taxis are available, but can add up to as much as $60 to get from airport to downtown; train fare is less than $8 per person.  If we hadn’t taken the train, how else would I have gotten a pop-up map and my first Olympic pin from a team of transit policemen at our stop? We are staying in an apartment between Gastown and Yaletown, near the Chinatown gates, and a stone’s throw from BC Place, where the Opening Ceremony will take place.

We took a chance renting from a Web site called www.Rent2010.com, but the condo actually exists and is much more reasonably priced than what gougers were asking around nine months ago. Shame on them.

Tomorrow, the Olympic Village, where I am hoping to sell an extra pair of tickets to anyone offering best price.

Tip: There is a glut of seats to many events, and if you still want to have the experience, you can cut deals on eBay or Craigslist. Media outlets may be suggesting otherwise, but trust me, these games are not sold out.

It’s due to be in 40s-50s all week, raining, but not enough to dampen our plans and our spirits.