As the 2008 Summer Olympics in Beijing draws ever closer, interest in traveling to China is rising as never before.

With this in mind, we would like to advise you on one of the pitfalls of traveling in modern China: bungled English signs that will confuse, misdirect, and confound you. This is no joke.

If you follow every sign to the letter, you’ll surely find yourself bogged down in a murky morass of mangled diction, teetering precariously on the brink of an unfinished sentence, or hopelessly lost in a labyrinth of misused prepositions.

It is to avoid such linguistic disaster that we offer up the following practical guide to common “Engrish” phrases glimpsed in China–because despite a high-profile campaign by the Chinese government to correct the English language signs, particularly in Beijing, many examples of hilarious malapropisms still exist.

A production crew on location in China gathered these real-life examples of Chinese “Engrish” on a recent trip into the Chinese interior along the Yangtze River. Together, they snapped a series of helpful cautionary shots of some of China’s most misguided English translations.

Of course, understanding some of these translations is relatively easy, but others take some effort to decode. 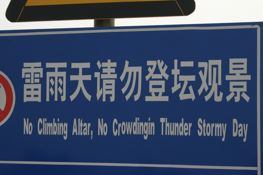 For example, this sign advising tourists against climbing altars, as well as crowding, is a bit opaque. This sign was spotted near the Three Gorges Dam. Altars are usually religious objects, and we’ll admit that climbing them is probably a poor idea. Somebody is bound to get offended. It also isn’t advisable to climb tall objects during storms. You could get fried by a lightning strike. Crowding, too, is sort of unpleasant and possibly dangerous.

But in the end, the prohibition just doesn’t make sense. What is really going on here?

Our professional translation: “During stormy weather, do not climb the monument to view the scenery.” Bicyclists may also be mystified by signs directed at them.

Above, on a sign in Beijing, the bicycle doesn’t seem to be totally disallowed–after all, there’s no line through the bike in the circle.

Should the bike be parked? It sort of looks like it.

But the most maddening question … what does one have to park the bike to do?

It turns out the problem is there’s some information missing here. Our professional translation: “Please park your bicycle in the bicycle parking area.”

We found that even strolling down the street in certain parts of China can be an exercise in confusion. Just try and understand what this sign, snapped near the Terracotta Army site in Xian, wants you to do.

Direct you to the exit?

Make sure you don’t walk on the grass?

In fact, it’s a little of all three.

Professional translation: “Please follow the marked path through the scenery.”

Even finding out where to throw your garbage can be a challenge in China. Everyone recycles nowadays, even the Chinese.

Of course, they undo much of their commitment to the environment by “unrecycling” as well.

Still, it’s nice to know that you have an option– at least at the airport in Xian. Another interesting garbage can, this one found near Mt. Jiuhua, somehow doesn’t translate well, despite the fact that there aren’t actually any English words on it.

Apparently, Chinese citizens may frequently be tossing jack-o-lanterns and ghosts into their garbage cans.

In fact, it’s a place for throwing your unrecycleable trash–no plastic bottles or tin cans allowed here, thank you very much.

THINGS NOT TO DO IN PUBLIC

Everyone knows that there are a lot of things you just don’t do in public. Some of these are considered inappropriate anywhere. Other taboos are specific to certain cultures. We found that there are some fairly unusual restrictions on public behavior in China. Although it’s perfectly all right to spit it in public (this behavior has been practiced in China for a long time), it isn’t okay to “turn over.”

You might wonder why someone would think to “turn over” the Three Gorges Dam, where this sign was spotted. We can understand “turning over” on the beachfront so that you get an even tan, but in a place like this? We have to wonder what penalty the authorities levy for “turning over” the dam.

The professional translation is “Please do not climb over.” That’s an understandable prohibition.

We really do appreciate clarity, and we think these kinds of prohibitive signs work the best when all the no-nos are listed out in a completely graphical format, as below: 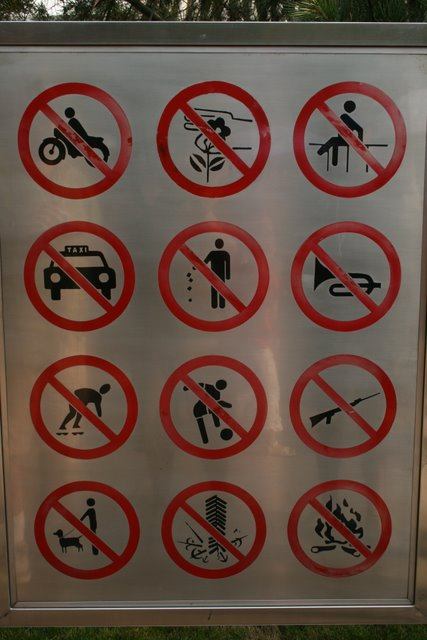 This sign is great because it’s so abundantly clear. There’s no written message here at all, and thus less chance for misunderstanding. At this park in Beijing, prohibited activities include ice skating, dog walking, horn blowing, fire starting, and ball kicking. You’ll notice that there’s also no “turning over.”

The only remaining question is, what exactly can you do in this park?

However, as we’ve seen, even some graphical signs can be a bit unclear. For example … What, exactly, is the prohibition in the upper left-hand corner? Our guess–no dragonflies allowed–turned out to be incorrect.

The answer: no kite-flying.

Sometimes the message of a sign is reasonably clear, but its wording is utterly ridiculous. Just in case you were wondering. That’s right, the Chinese have discovered a monstrous new creature they have dubbed the “tiger bear monkey,” and you can find it at the zoo in Chongqing–but be warned that it’s a nasty, ugly beast and you’d best stay far away. Do not allow children to approach its cage, and do not even think about offering it a banana. One member of the team received this explanatory card at a tea house in Yueyang. The only way it could be any more helpful is if the tea house produced it in such a way as to make it comprehensible to an ordinary human being.

We’re sure this tea purports to imbue all kinds of health benefits, and we hear it tasted pretty good, so who can complain? It’s also really nice to know that “the clear lung is good for the stomach.” If you’re ever in Yueyang, we highly recommend ordering up your own cup of litchi chinensis.

Oh yeah, and though there was Chinese printed on the back, don’t bother asking– we’re not going to translate this particular verbiage. But rest assured that they are very eager to have visitors think highly of their tea.

To learn more about travel in China, check out “The Symbol of 21st Century China Travel: Demolish” for an in-depth view of traveling in modern China. You can find plenty more of these types of signs over at humor site Engrish.com.

For more articles on travel in China:

Bound for Beijing: A Guide to 2008 Olympic Travel

Fighting for Your Vacation