Now that summer is winding its way to a close, this is one of the best times of the year to travel to one of our national parks – the crowds are dissipating, the prices are right, and there’s no need to travel far for a great experience.

These historic lodges are often in prime locations, and offer an opportunity to combine your outdoor vacation with a bit of architecture and history education.

You might be surprised to learn that the National Park System consists of 388 “units,” which covers more than 84 million acres in nearly every state (a unit also includes protected areas like a National Battlefield, a National Seashore or a National Scenic Trail). The beauty of our national parks is that they offer some of the top family-friendly places to vacation … many of which are in your own backyard!

The national park lodges are usually owned by the National Park Service, but each lodge is operated by private companies (for example, the corporation Xanterra operates all the facilities in the Grand Canyon, Zion, Yellowstone, and Bryce Canyon National Parks, among others). Here are just a few of our favorites, where you can get up-close-and-personal with some of our most treasured sites. 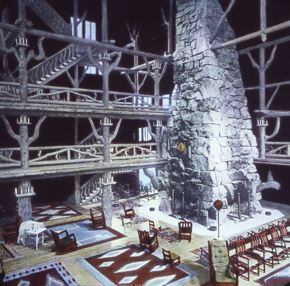 Hailed as one of the grand dames of the National Park lodges is the Old Faithful Inn.

One of the last of the log hotels left in the U.S., the Old Faithful Inn was built in 1903 and stands next to Old Faithful Geyser. The original lobby of the lodge was initially erected to provide winter shelter for laborers working in the park.

The massive 500-ton rock chimney, one of the focal points of the inn, was built from volcanic rhyolite quarried just a few miles from the site. Robert Chamber Reamer was the self-taught architect behind the Inn, and his vision and style set the movement in American “park-itecture” that is still prevalent to this day.

The hotel was one of America’s first to use electric lighting and provide hot water to its guests. Just be aware that part of the “grand old” tradition means that televisions and Internet access are not always available in every room. But do be sure to take advantage of the daily chambermaid/historians tour to learn about the hotel’s history, which is open to both guests and visitors.

Note that as this is one of the most popular lodgings in the park, this hotel can book up fast. Make your plans at least six months in advance.

Lake Yellowstone Hotel is notable for holding the title of the oldest lodging within the National Registry of Historic Places, in any of our national parks.

In operation since 1891, the 158-room Lake Yellowstone was one of the hotels financed by the Northern Pacific Railroad and has had an extensive career of housing visitors to the park since opening its doors.

Today the distinguished hotel is a favorite with Yellowstone’s older visitors. It has become a popular gathering place, where guests can congregate in the sunroom in the late afternoons and look at the lake, while a pianist plays or gather around the fireplace in the colonnaded lobby after a day of sightseeing.

The architecture of the 150,000-square-foot Ahwahnee hotel is renowned for its distinctive design influences blending Art Deco, Middle Eastern, Native American and craftwork. But what is more interesting, perhaps, is that the hotel was actually built to resist fires.

Situated at the base of a granite cliff, the hotel was constructed using concrete molds of milled timers that were dyed to resemble redwood. The process was mastered so flawlessly that people are often totally unaware they are not staying in a timber built lodge.

The exclusive hotel was designed by noted architect Gilbert Stanley Underwood, who helped to define the “rustic” style and has had many prominent guests since opening its doors. One of the most famed visitors was Yosemite photographer Ansel Adams. Rates range from $426 to $984 (a suite with library parlor). 559-253-5635 www.yosemitepark.com/Accommodations_TheAhwahnee.aspx

The El Tovar was commissioned by the Santa Fe Railroad and built as a lure to get tourists to the South Rim of the Grand Canyon. The hotel’s architecture is a fusion of Scandinavian, rustic and Swiss styles that present a western ambiance that has remained January of 1905.

Unquestionably the main reason to visit the El Tovar is simply the backyard view. Built just 20 feet from the edge of the Grand Canyon, visitors come time and again to enjoy unparalleled vistas of the Canyon right from within the comfort of their own rooms. Nestled in the mountains of Glacier National Park is the historic Sperry Chalet. If your family is the adventurous type, you might lace up the hiking boots, grab your gear and head on out to visit Sperry. That’s right, you can only get to the Chalet by foot. The trail starts out at an elevation of 3,214 feet and ends above 6,500.

The lodge consists of two Swiss style buildings, the main two-story dormitory and the smaller dining chalet. Built primarily out of local stone in order to withstand the strong Montana winters, Sperry is one of only a handful of original lodges remaining in the high country, due to its hardy construction.

Sperry was built in 1913 to encourage hikers to visit the park’s more remote mountains once coined, “The American Alps,” and is perched on the edge of an alpine meadow, an ideal starting point for hikers frequenting the popular high country trails.

The guest rooms have not changed since the 1920s, offering dormitory-style beds, no electricity, running water or heat. Note that the lodge is only open between July and September, but even high season room rates quite reasonable at $160 for the first person and $110 for each guest thereafter. www.sperrychalet.com.

Operating since 1917, Paradise Inn is one of the oldest mountain resorts in the Northwest. The Inn is the combined efforts of Stephen Mather, the first director for the National Park Services, who wanted to have a resort at the base of Mt. Rainier since he had first climbed the peak in 1905, and architect Frederick Heath.

Heath, who was largely influenced by Frederick Law Olmstead, (touted as the founder of American landscape architecture) reflected his affinity for nature in many of the design elements at Paradise. One of the most noted is the Inn’s lobby, featuring towering cedar logs for the exposed framework, a bank of 14 French doors that open to allow breezes to flow through the space, and dormer windows that flood the area with natural light.

People visiting Paradise Inn will be captivated by Rainier’s alpine meadows that were once praised by John Muir by calling them, “the most extravagantly beautiful of all the alpine gardens I ever beheld in all my mountain-top wanderings.” However, Mt. Rainier is probably most widely visited for its skiing at famed Paradise Valley. The resort is re-opening next year 2008 after extensive renovations, and will be open from May through September with rates ranging from $104-$191. 360-569-2275, https://rainier.com

By Loretta Copeland for PeterGreenberg.com

Previously by Loretta Copeland on PeterGreenberg.com:

What If You Don’t Spa?